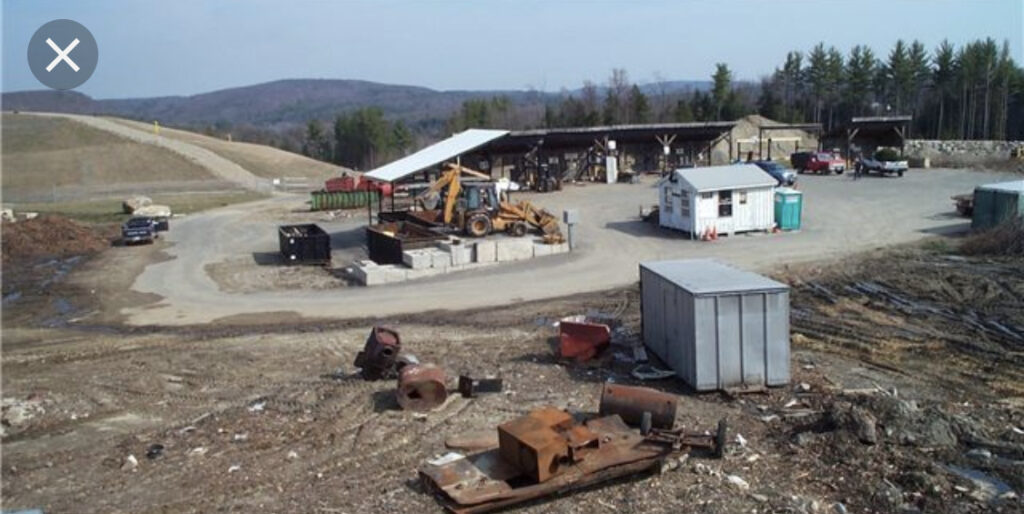 Regional Refuse Disposal District #1 was formed in 1970 by the towns of Barkhamsted, Colebrook, New Hartford and Winchester. Using the Connecticut General Statutes as a basis the member towns by vote of their town meeting established the District and governing Board of Director’s. A charter and bylaws were adopted by the Board, members of which are appointed by the respective town’s Board of Selectman to three-year terms. Colebrook withdrew from the District in 1991.

In 1970, the municipality, including Barkhamsted, Colebrook, New Hartford, and Winsted/ Winchester used the Rowley Street,Winsted located as the location to dispose of household waste. (Currently the site of Winchester Public Works). Nearing capacity, the District had to find a new location. Working closely with the Town of Barkhamsted the Board of Directors identified, acquired, and constructed the landfill and buildings currently being used. The facility opened in 1974 as a landfill and recycling of cardboard, metal and glass started through volunteer efforts. Legislation soon after passed recycling laws.

The landfill was operated until 1988 and all District trash was buried on site.  In 1988, a trash–to–energy plant opened in Hartford. The District was among the original forty-four towns participating in the Mid-Conn Project which has grown to serve seventy towns since and recycles nearly 800,000 tons of municipal solid waste (MSW) per year. The District continued to operate the landfill for the disposal of bulky and special waste. In 1993, the landfill was closed and capped.  A bulky waste section, utilizing specific containers defining debris, was constructed with all items shipped off site for proper processing. The only exceptions to this are leaves, wood waste and clean fill. These items are processed on site and sold to the public.

Environmental issues arose over the landfill, starting in 1983. Litigation occurred between the District and the Town of Barkhamsted over contamination problems. In 1988, the District was notified that it may potentially be added to the Federal Government’s Superfund List. This was the beginning of a long and costly process. A group of potentially responsible parties (PRP’s) was identified.  The site was thoroughly investigated to determine the nature and extent of the contamination. A significant groundwater contamination problem was identified. The landfill was capped with an engineered impervious liner system designed to eliminate rainwater from passing through the buried refuse and carrying hazardous wastes off site. The capping was a four-million dollar expense paid for through a state bond. The preliminary investigation and the network of ground water monitoring wells installed was also a large expense paid by the District and PRP’s. In 2001, the EPA approved RRDD#1 as a remedy for site cleanup Monitored National Attenuation (MNA). Computer modeling predicts that the level of contamination of the groundwater will diminish to safe levels by 2016. This occurs primarily for two reasons; first, the cap on the landfill inhibits water traveling through the buried refuse and carrying hazardous chemicals away in the groundwater; secondly, is that the unique blend of chemicals identified at our site, to a certain degree, has an interaction that tends to neutralize them. The District continues an extensive groundwater monitoring program and makes annual reports to the EPA. The second five-year summary report provided to EPA in 2008 has confirmed that the MNA remedy is working and the status of the groundwater contamination is slightly ahead of the computer modeling.

The District meanwhile continues to operate a transfer station to serve the three communities. There is a constant evolution in waste disposal centered on finer separation of wastes so that less expensive recycling or disposal options can be obtained.